Zechariah is the son of Berechiah and grandson of his more recognized grandfather Iddo who a priest participating in the first wave of exiles to return to Jerusalem from Persia (Neh. 12:4). Zechariah served as a priest (Neh. 12:16) and was called by God to be prophet. His prophetic ministry began about 520 B.C., shortly after the prophetic ministry of Haggai, with whom he worked hand-in-hand. Both prophets stressed the need to rebuild the temple. This theme is especially pronounced through a series of visions in Zechariah 1-8. Chapters 9-14 have different subject matter and do not contain visions, causing some scholars to postulate that a different author must have been the source for these later chapters. However, a more biblically consistent assertion is that Zechariah, whose prophetic ministry extended for decades, wrote the later portion late in life in order to address a different set of concerns.

Several different genres or literary forms are utilized by the prophet in developing the writing of Zechariah. Zechariah beings with an exhortation to repent (1:1-6), then a series of eight visions (1:7-6:8), each of the visions is expressed in highly symbolic dream like imagery accompanied by an angelic interpreter. After these visions comes a symbolic action (6:9-15), which serves as a bridge to next section of oracles (7:1-14:21). Oracles in this sense are like future looking sermons. Zechariah is largely proclaiming what God will do in the future through symbolic language. This category of future looking sermons is often described as apocalyptic (think book of Revelation). 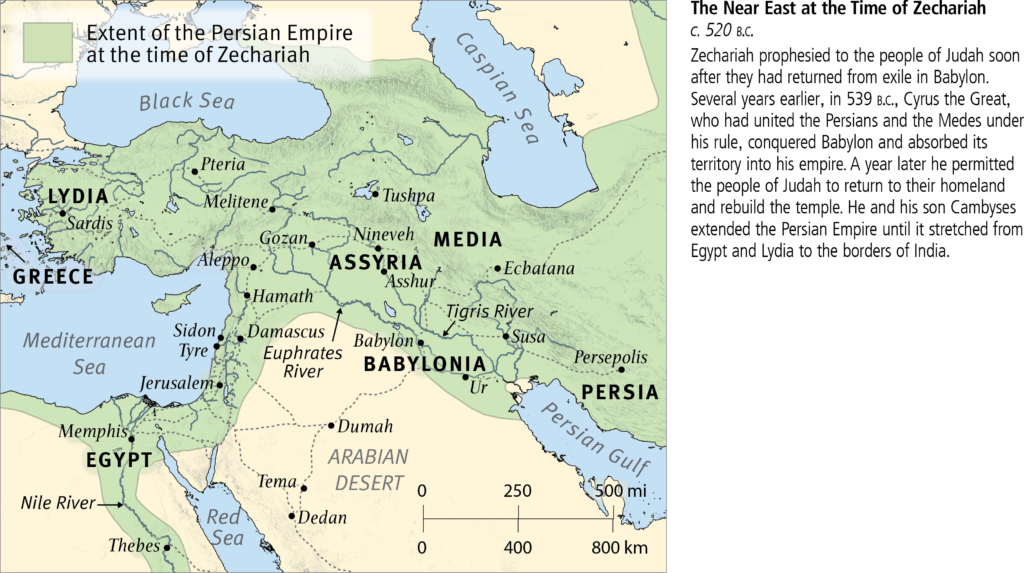 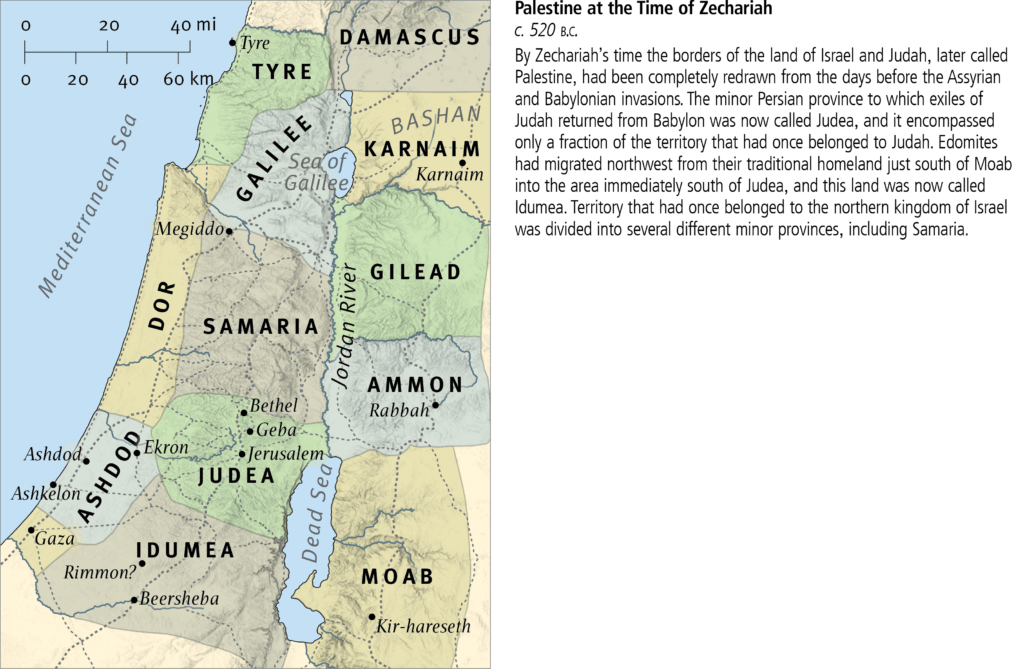 The people returned with a desire to reestablish a Jewish society and especially to rebuild the Temple in order to worship God. This effort begins under the leadership of Ezra and is spurred along by the prophet Haggai. As Haggai’s prophetic ministry nears its end the people are becoming with the incomplete two-decade long Temple building project. Furthermore, they were still under heavy tax burdens by King Darius to support his impending war campaign against Egypt. It did not feel like the glorious return the people had anticipated from earlier prophecies.

One month before the end of Haggai’s ministry God raised up another prophet, Zechariah, to exhort and encourage the people to continue in the work.

Theme of the Book

Zechariah desires to comfort and encourage his countrymen who are rebuilding the Temple and establishing their community under Persian rule. He wants them to see that their experience of being discouraged because of insignificant progress and days of “small things” (4:10), doesn’t take into account the mighty work God is doing to keep the covenant promises he has made to his people since the days of their fathers.